This week we're shining the spotlight on one of our successful alumni. Richard Krebs is CEO at Hyspecs and participated in the first owner Manager Programme (OMP) in 2001. Hyspecs is a major hydraulic engineering company specialising in hydraulic design, manufacture, build, parts and service for a wide range of global businesses. The business is based in Auckland and Christchurch with further offices across New Zealand and in Australia. 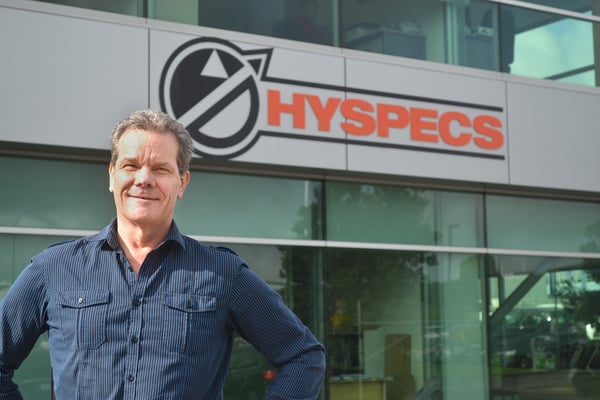 For Richard, there were two big question marks about taking part in the first Owner Manager Programme (OMP) in 2001, following a meeting with BNZ.

Firstly, how could any course truly be a help? After all, Hyspecs was going through a huge upsurge in growth. Secondly, how could it possibly answer the problem that many entrepreneurs experience – working too hard and not getting any downtime?

‘I was initially very sceptical, because what are a whole bunch of university academics going to know about my business?’ says Richard.

‘I would get home from work about 6:30 pm, have dinner, say a few words to my wife and children, and then go to bed. I was so exhausted I would struggle up the stairs each evening – and this was turning into my daily routine. I saw the weekends as an island – the only chance I had to recharge my batteries. I would sleep most of the weekend, and then do it all over again,’ he adds.

Thankfully, it didn’t take long for Richard to discover that he wasn’t alone, and for the OMP to make an impact. ‘Most of the other participants were similarly sceptical, but the first session was a revelation. You get so focused on your business that you sometimes lose sight of the obvious. Problems are not unique, and they can be solved.

‘It’s a safe, caring environment where brilliant ideas are shared selflessly – that’s not just among the tutors, but also among the participants, which I thought was fantastic.’

| Right people in the right places

One of Richard’s take-homes was that if there are good people in the company – why not use them? ‘By block three of the OMP, I brought in my senior staff and said, ‘your department is yours to run however you like, but let’s just follow a few rules’. The epiphany was that if you give your team the authority, trust and responsibility, they’ll do it.’

By the end of the OMP, Richard was able to take a more holistic approach to his business – effectively ‘pulling the company to bits and rebuilding it back up again’. This helped him identify where the company was duplicating tasks, and where it could work more productively and efficiency – particularly in the area of sales. Recruiting two more staff in the right place produced four times the turnover.

One of the most significant structural changes came recently when Richard handed over the running of the Auckland branch of the business to a colleague. ‘I realised I had to seperate that out. So now I am just CEO – which gives me clarity and allows me to be more strategic – rather than getting bogged down in the day-to-day stuff.’

Recently, Hyspecs started up a new manufacturing division and Richard believes the business has never been in better shape. He has completed two Owner Manger Exchange programmes and also sends his team to several Icehouse-run sales training and growth workshops – the former producing unexpected results.

‘What the facilitators bring is heavy-hitting and pertains to your business, which is fantastic. I’d come to work on Monday and my team would hide from me because I was brimming with enthusiasm and new ideas!’

| Re-engaging you and your business

Richard has a word for all business owners who feel that things aren’t going their way. ‘One of the key discussions which kept coming up was how your personal and business lives swamp each other. You can’t separate yourself from your business, but you can learn how to make sure it doesn’t take you over.

‘I was getting crushed. If it wasn’t for The Icehouse, I doubt very much I would still be married, and Hyspecs would be anything like it is today. I already had the people to help me, I just didn’t realise this. Previously it was overwhelming and you feel that you have to do everything yourself. The revelation is, that you don’t.’