Hortus Limited was set up in 2008 to supply labour, machinery and an experienced management group to all growers in the Horticulture and Viticulture industries.

Managing Director, Aaron Jay, had a long standing relationship in the industry when he realised he had something of real value to offer. Having started as a worker in the industry himself, he saw an opportunity to provide quality labour through his business at the time, Vine Works. 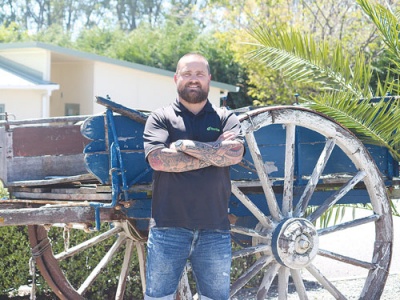 “We had been working in the industry for a long time. So when we went out on our own, we realised that we had something more to offer on the basis that we knew the industry inside-out,” Aaron says.

Once launching Vine Works, Aaron had an image in his mind of what the business would look like in terms of staffing numbers, client turnover, and structure. It wasn’t until Aaron and his team had achieved this vision that confusion struck and he found himself at a road block.

“In my mind, I had an idea of what I wanted the business to achieve. We suddenly found ourselves at that moment and I didn’t know where to go. So, that’s when the BNZ encouraged me to do the Owner Manager Programme,” Aaron says.

In the first instances of starting the Programme, Aaron felt out of his depth. But as the first block of the Programme came around, he soon realised that he was surrounded by other like-minded owner-managers that were facing the same challenges as himself.

After going through the Owner Manager Programme, Aaron went through an extensive re-branding in 2013. When asked if this was a result of the programme, Aaron simply said it came down to one, hard-hitting question – “are you a vineyard contracting company or a labour supply company that specialises in viticulture?”

This question, by external panelist Peter Lucas, changed the entire direction of Aaron’s business. From that moment on, Vine Works became Hortus with a renewed strategy and core to their business: to supply world class labour service to the horticulture and viticulture industries. 95% of Hortus’ work is still in viticulture, with a real effort being made to slowly but surely integrate into the horticulture industry. Aaron has been very cautious migrating his business into both ventures to ensure no brand damage is done in the process.

Today, Hortus has received a lot of media attention as “setting the benchmark for worker accommodation”. For Aaron, this has been a core value that lies very close to Hortus’ heart.

“From day one, we’ve been doing what we feel is right. Local councils dictate how worker accommodation should be, but for us, as a company, we’ve always had a philosophy that we would never let anyone stay anywhere we wouldn’t be prepared to stay ourselves – just as we wouldn’t expect anyone to do anything we hadn’t done or wouldn’t be prepared to do ourselves. So, we’ve kept those values dear to our heart and core to our business and I think that speaks volume for how we house and look after our workers,” Aaron says.

The Owner Manager Programme and The Icehouse gave Aaron confidence – the confidence to go forward with his business decisions and himself as a business owner.

“One of the biggest things that The Icehouse has given me is confidence."