Tourism has always been in the blood for Tim Alpe, co-founder, CEO and self-proclaimed “chief JUCYfier” of fast-expanding vehicle hire company Jucy Rentals. A graduate of The Icehouse Owner Manager Programme, Alpe was named the 2010 Ernst & Young Entrepreneur of the Year in recognition of his outstanding business flair. 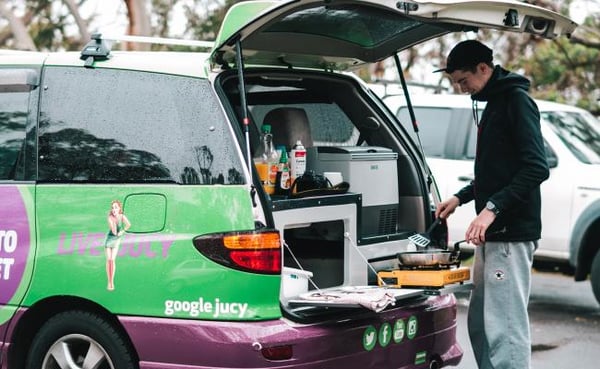 The seed was sown early. Growing up, Alpe watched his father, Chris, launch Maui campervans in the early 1980s and go on to pioneer the motorhome industry in New Zealand. After leaving university, Alpe worked for Tourism Holdings (THL) in Los Angeles, Auckland and Melbourne, then at 27 decided, with his brother Dan, to try something new. In 2002 the pair started what Alpe calls “a little backpacker car business in Parnell”.

They quickly found themselves in a growing niche market, adding luxury full-size sedans, people movers, and recently campervans to their fleet. In just nine years Jucy has grown from a mere 35 cars (all bought from the Auckland Hospital Board) to a range of more than 2,300 vehicles.

In the early days, Alpe and his brother followed the typical start-up route, doing everything from cleaning and dispatching the cars to customer pick-ups and reservations.

The business was growing, but relied on what Alpe calls a “street hustler mentality”. He sought guidance and decided that Jucy could benefit from The Icehouse Owner Manager Programme (OMP). Over the next two years the brothers participated in the programme in order to achieve their goal of developing a “smooth-running, funky front-end” for the business and a structured back-end.

Alpe says The Icehouse dispensed much needed discipline and taught them to step back and take a broader view of the business.

“It made us write a business plan, sit back and reassess,” he says.

The Icehouse also guided moves to establish a board and offered valuable networking opportunities.

Facilitators and speakers on the Owner Manager Programme were inspirational, says Alpe, and their corporate understanding meant the programme was “a combination of academia and entrepreneurship mixed into one”.

Although Jucy operates in a highly competitive, saturated market, its innovative approach has ensured continuing growth, with good cash flows, and a turnover of more than $30 million.

Though Jucy already has rental cars, campervans, a hotel, a cruise business and a custom-build campervan business – Jucy By Design, there is still a world of growth possibilities, says Alpe.

Pursuing the goal of building a recognisable, world-class tourism brand, in 2007 Jucy put its first campers on Australian roads – a move that Alpe says has been very positive for the company.

“Australia is probably growing ever faster than New Zealand. We have gone from one vehicle in 2007 to just under 500 campervans in 2010.”

Alpe's advice for entrepreneurs looking to create their own business success stories: