Lizzi Hines is the CEO of Spaceworks, commercial interior design specialists, based in Auckland. For three years, between 2011 and 2014, she completed business coaching with The Icehouse coach, Zac De Silva.

Lizzi took over the Spaceworks when it was on the verge of being taken over by a construction company. She had worked for the business and is now its sole shareholder. At the time Lizzi took over Spaceworks, the business was operating with two staff. The business had been operating in a consistent manner for about six years prior to that but Lizzi was at a stage where she wanted to grow the business considerably into other areas. Spaceworks was a business which had great potential to make a lot of profit given Lizzi’s passion, however Lizzi needed to run the business with real accountabilities in order to be more successful. Lizzi faced the usual challenges many SMEs in New Zealand face. Spaceworks required more consistent, stronger cashflow, growing returns to Lizzi as the owner, expanding and winning more business and grow the experience of existing customers.

Lizzi initially enquired at The Icehouse about growth programmes, but the team could pick her business would be just right for tailored business coaching. Lizzi had worked with two coaches previously but both had put her off so much she was very reluctant to consider another one. The team at The Icehouse eased her into the process, setting up a no-obligation coffee with Zac de Silva. When Lizzi met with Zac she immediately knew the personality fit between them both was right. Zac was flexible with how Lizzi wanted to work. Zac’s background and connections in the industry were an added bonus and Zac introduced Lizzi to a number of new clients and referrals. Lizzi’s coach Zac ensured that a large amount of time was spent in the business and as well as working on the business.

“Zac helped to steer me in the right direction to grow the business. I understood my business, I didn’t want to go through session after session of analysis, I just wanted to get into straight away, which is what we did.” 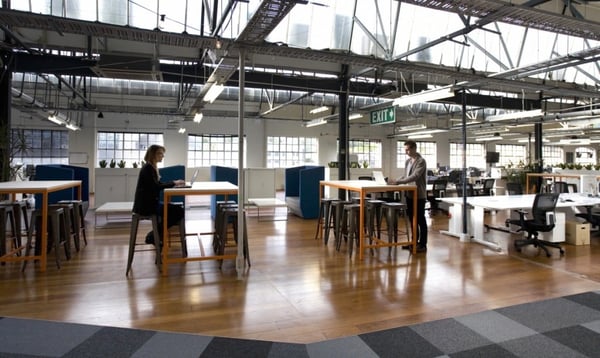 As a business coach, Zac made a point of asking the right questions to get to the main issues and opportunities which needed to be focused on in the Spaceworks business. In addition to her own personal business coaching, LIzzi asked Zac to mentor her staff one-on-one. This allowed her staff to understand the coaching process and what Lizzi was working through and allowed them to see the value of the coaching process. Zac sets goals with Lizzi’s staff and reviews these every 6 months during a one-hour catch up to help push them along and grow their business nous.

In addition to holding Lizzi accountable, coaching has helped LIzzi to develop leadership skills, she has better knowledge of where she can make her profit (and gross profit) , sales growth and how to win new clients, how to have accountability in the business, new controls and systems so there are no surprises and a renewed confidence in herself. Lizzi credits Zac with honing her business skills. “He’s hot on numbers and taught me how to acknowledge those numbers and work with them.” Lizzi values Zac’s willingness to help her and says he goes above and beyond in terms of assistance and availability. “Even when I email him at 9pm at night not expecting a response – I will get an answer from Zac. He’s flexible, and he actually cares about the business. He’s not just working to his allocated hours.”

Since taking on Zac as a coach, Lizzi has achieved profit growth of 400% over a two-year period. Spaceworks now operates with six full-time employees. Lizzi recognises coaching is not a quick-fix or a short-term thing and it’s definitely something she plans to continue.

“I certainly have more direction of working on the business, rather than in it. I’m well aware of the numbers and even better – I know how to change the numbers.”

My stress levels and well-being has improved “The Icehouse did a great job of figuring out the right fit for me. Zac fits me and my business – he’s like having a boss, he keeps me accountable.” The major milestones the business has achieved includes not only great profitability, but teamwork has improved, the brand has been defined and there is a wide knowledge that Spaceworks is where you go when you need design done. The number of awards the business has gained is a testament to this.

Lizzi continues to grow as a business person and leader and is well recognised as an inspiration to many others in her industry and beyond. If there’s one tip for entrepreneurs or business owners who feel they need to make a change for the better but don’t know what to do, Lizzi says they should take a risk and engage a business coach.

“I think it would be worth having someone take an outside perspective. They aren’t involved or close to your business like you are – they’ll see it from an objective point of view and advise you on the best way forward.”

Spaceworks now operates in three main spaces – hospitality, office and retail. “One of the biggest things Zac helped us to do was diversify. We didn’t change our model, instead we took on more business well within our skill set and we are benefiting incredibly from this decision.” “I was initially nervous about the time investment – but spending time on the business really is the best thing you can do for yourself, your staff and your business. The brilliant thing about tailored coaching is just that – it’s tailored so it’s flexible. Zac and I both know what hours we’re working to and can change frequency depending on my schedule.”